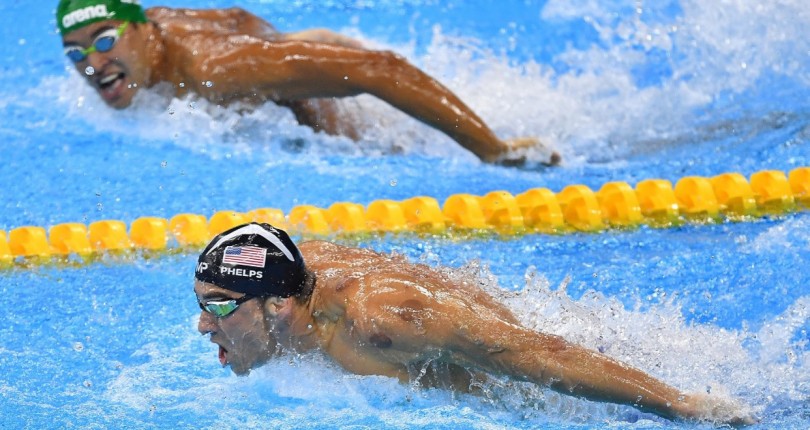 Don’t be the guy in the green cap. Be like Phelps!  Keep your eyes on the goal!  Don’t let obstacles get in your way of achieving your goal.  Obstacles are something we see when we lose sight of our focus.  Manage your impatience.

Michael Phelps is the most decorated Olympian with a total of 28 medals and 39 World Records.  As a teenager, Phelps focused on Ian Thorpe, Australian swimmer.  Thorpe initially said it was highly unlikely for Phelps to win 8 Gold Medals @ 2008 Olympics.  Phelps used the remarks as motivation, taping them to his locker during the games.  On August 17, 2008 Phelps won his eighth gold medal in the 4×100-meter medley relay, breaking Mark Spitz’s record of seven gold medals won in a single Olympic Games, which had stood since 1972. Said Phelps, upon completing the event that awarded him his eighth gold medal, “Records are always made to be broken no matter what they are….Anybody can do anything that they set their mind to.”

When he was preparing for the 2008 Summer Olympics in Beijing, he swam 80,000 meters per week.  (That’s 50 miles.) Difficult doesn’t mean impossible. Don’t get distracted. Write down your goals AND SEE THEM EVERYDAY.

According to the results of a Harvard study, only 3 percent of students had written goals and plans to accomplish them, 13 percent had goals in their minds but haven’t written them anywhere and 84 percent had no goals at all.

Think for a moment which group you belong to.

After 10 years, the same group of students were interviewed again and the conclusion of the study was totally astonishing.

The 13 percent of the class who had goals, but did not write them down, earned twice the amount of the 84 percent who had no goals.

The 3 percent who had written goals were earning, on average, 10 times as much as the other 97 percent of the class combined.

People who don’t write down their goals tend to fail easier than the ones who have goals and plans to accomplish them.

Tracy McGuire, a Realtor with The Rogers-Long Team since 2016,  previously has worked in many creative professions including the art department for commercials, television, and movies in Hollywood. While working in L.A., Tracy bought her first home and enjoyed the process so much that she began working with her Realtor’s team as an assistant. In 1998, Tracy moved back to the east coast to raise her children in Richmond and 18 years after the move back home, she earned her real estate license. The RLT excitedly brought Tracy on to work with buyers and sellers due to her commitment to grow, her powerful energy, and most importantly, her motivated attitude. Tracy has found a lot of early success in her career on The Rogers-Long Team, and has worked with clients in and out of the city of Richmond and has even gone as far as Lake Anna to get the job done!

Monday Motivation: Persistence Gets It, Consistency Keeps It