Monday Motivation: Be The Light! 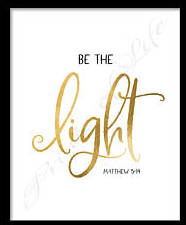 “Be The Light”. This is the message that seems to be following me recently.

The events in Las Vegas on Oct 1st were horrific and honestly, it’s still weighing on my heart.  I found myself continuing to turn to the news and waiting for answers that never come.  I guess evil will never make sense.  Watching how others are dealing with this tragedy motivated me.  Keith Urban played a tribute in Nashville to the Las Vegas victims with a candlelight vigil, softly saying “Be The Light” and playing  “A Bridge over Troubled Water”.  Eric Church, at the Grand Ole Opry a few days after playing at the Las Vegas festival, talked about how difficult it was to get back on stage. He had been at the exact place where the incident had occurred 48 hours earlier.  What gave him strength days was Heather.  Heather, wearing Eric Church Choir tour t shirt on Anderson Cooper CNN, talking about Sonny (her husband that died in the incident).  Eric Church was Sonny’s guy and they went there to see his guy.  Listening to Heather, Eric felt compelled to write a song “Why you and why not me?”

Eric Church’s song quietly reminds us to fix what is broken in us and don’t let evil take away our light.

Be the light.  Be someone’s strength.  Count your blessings. Share yourself and allow your full personality to shine.  Be genuine and caring. Be the light. It’s about community and putting light in the world.  Keep investing in people-start a pattern now!

Tracy McGuire, a Realtor with The Rogers-Long Team since 2016, previously has worked in many creative professions including the art department for commercials, television, and movies in Hollywood. While working in L.A., Tracy bought her first home and enjoyed the process so much that she began working with her Realtor’s team as an assistant. In 1998, Tracy moved back to the east coast to raise her children in Richmond and 18 years after the move back home, she earned her real estate license. The RLT excitedly brought Tracy on to work with buyers and sellers due to her commitment to grow, her powerful energy, and most importantly, her motivated attitude. Tracy has found a lot of early success in her career on The Rogers-Long Team, and has worked with clients in and out of the city of Richmond and has even gone as far as Lake Anna to get the job done!

Monday Motivation: Focus On Today’s Game, Not The End Game