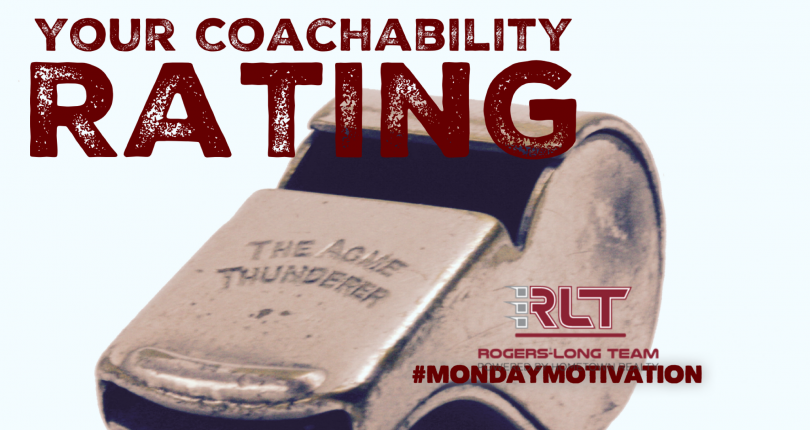 I’m a big believer in coaching. Whether you’re a student, an athlete, an employee, or even a leader in any organization, everyone should have a coach and/or an accountability partner. I’ve been a part of the same coaching company since 2013 and although it does cost a decent sum of money, the accountability and lessons learned are priceless. I’ve learned more about myself throughout this coaching program than I ever thought possible.

In one of my recent coaching sessions, the question was posed: “How coachable are you?” Without even thinking twice, my response was “very”. I believe in coaching, I enjoy being coached, and I even coach others…so of course I’m coachable. Well, not so fast. After filling out a quick self-assessment of how “coachable” I am, I found out – to my surprise – I still have a lot of work to do to be more coachable.

In this session, coachability was defined as the “ability or willingness to learn and change with outside help and perspective. Here’s a great self-assessment of gauging how “coachable” you are:

Your self-ratings probably look and feel pretty decent. Now, here’s the kicker: becoming more coachable is the compounding effect of being more willing to learn AND change. With that said, we are going to multiply the two ratings together to give ourselves a coachability rating.

Are you surprised with your coachability rating? For me personally, I was stunned. I rated myself a 6 in learning and an 8 in implementing change. But together, I was less than 50% (6*8 = 48%).

At first I was a bit disappointed, until my coach flickered a little lightbulb that suddenly went off: by only 1 minor adjustment on either scale (learning or implementing change), there is a massive capacity for growth. By becoming just one point better in the willingness to learn (going from 6 to 7), my coachability rating jumps to 56%.

What is one minor adjustment you can make today to become more coachable?

Monday Motivation: What Path Will You Follow: Progress or Excuses