Monday Motivation: The View From The Top 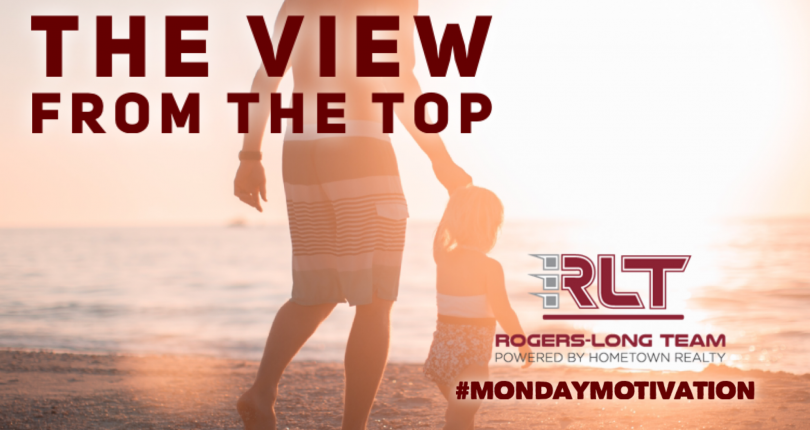 On July 1st, 2014 The Rogers-Long Team was born when Kevin Long agreed to work as a Buyers’ Agent with me. Fast forward six years and we have built a wonderful team of seven people. Transaction Coordinator Stacy started in July 2015, Agent Kaitlyn in December 2016, Agent Mike in February 2018, Client Care Coordinator Dawn in September 2018, and Agent Ashley in October 2019.

There are a lot of real estate teams that will bring on individuals just for the sake of adding more bodies to the squad. More breathing humans that have a real estate license = more money in the eyes of many leaders. Not for us. We have grown very methodically and purposely. We want to build a team that makes each other and those around us better.

There’s no real way to calculate exactly what makes the perfect RLT teammate, but it’s one of those things where when you know, you just know. I’ve always wanted to work alongside people that have a great attitude. Sometimes this means smiles, sometimes this means joy, sometimes it means thankfulness, and sometimes it means drive. The best way I can explain it is this: although I am typically what you’d call a “glass half-full” type of person, I don’t really care if your glass is half-full or if your glass is half-empty. I just care that you’re prepared to pour that glass out and not only buy in, but lock in to what we’re trying to accomplish. I’m very proud to say that we have seven locked in people on this team who will pour it all out for their teammates, their families, and their clients. In short, this team makes people better. And as the leader, I must encourage that and always keep a bird’s eye view from the top to be sure we’re always acting on that.

On May 13th we welcomed our daughter Elliott into the world and just like my teammates, I want her to make others better, too. She’s certainly made me better already! Everything they say about having a baby is true – it is the best moment of your life and you’ll be more impressed with your wife than you’ve ever been before! We’ve been lucky that she’s been a good baby – she sleeps well, eats well, and appeases her mother with some good cuddles. There really hasn’t been any unexpected hurdles – so far – taking care of a newborn. We both felt well prepared for a little less sleep, some uncontrollable crying, and never-ending diaper changes.

I already had a lot of respect for moms, but my respect has gone through the roof experiencing Emma take care of a baby first-hand. As a mother, it must be a “No Days Off” approach and boy has she done that! I’m very proud of her.

As a father, I feel it is my responsibility to support my wife by taking a few things off her shoulders and one of those has been the early morning feeds and diaper changes. Being up at 3am each morning to do just that, I’ve had a lot of silent time to think and shortly after Elliott was born, I decided to write her a little poem. I’ve always had a lot of thoughts to get on paper and at times it’s difficult to bring them all together. This, though, was easy. And I’m sure it had something to do with that cute baby staring up at me. While feeding her a bottle, I had a physical view from the top. But as a father and as a role model for her upbringing, I must have a metaphorical view from the top. I must keep things in perspective for her.

I’ve read this to Elliott every night so far since I finished it. Although I’m confident that if she becomes just half the person her mother is she’ll be more than fine, hopefully this poem encourages her to be the best she can be and above all else, make those around her better. The poem goes like this:

Be respectful in what you say, kind in what you do. Do unto others as you would have them done to you.

Listen to understand, not to reply. With a little curiosity, your limit’s the sky.

Days will be long, sometimes you’ll be tired. To whom much is given, much is required.

Lead by example, be generous, have fun. Make those around you better, that’s how it’s done.

Life can be tough, sometimes you’ll want to stop – but when climbing a mountain, think of the view from the top!

Monday Motivation: Write Your Own Headline