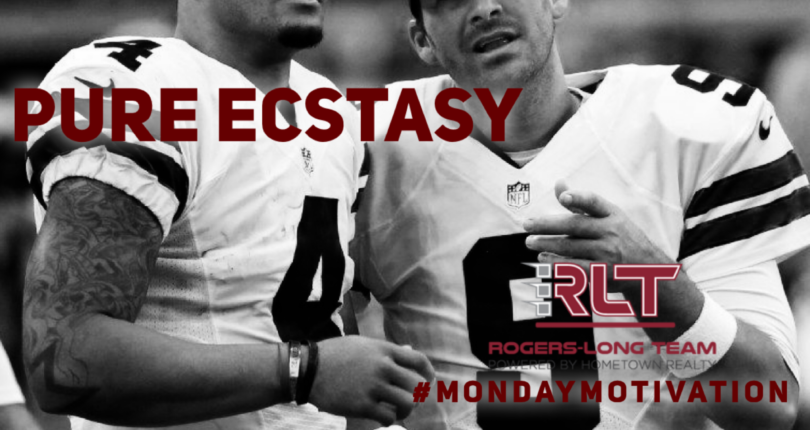 Growing up (but no longer) a diehard Redskins fan, I feel like I’m cheating as I write about a Cowboy. But if you read this from former Cowboys’ quarterback Tony Romo, you’ll understand why it grabs my attention and deserves my respect. It deserves yours, too.

In the later years of his career, Romo got hurt and the timing couldn’t have been worse for his future as the quarterback of the Dallas Cowboys. The injury occurred in a preseason game, a tune up against the Seahawks before a season that was being hyped up as one of the best chances the Cowboys would have to make it to the Super Bowl since 1996. Enter rookie Dak Prescott, a fourth-round pick from Mississippi State. Prescott was supposed to ride the pine for a few years and learn from the veteran Romo, but Romo’s injury quickly ruined that plan.

Fast forward nine weeks into the regular season and the Cowboys were 8-1, a record that Prescott was given – deservedly – a lot of credit for. Romo was ready to make his return but the Cowboys were faced with a difficult decision: do we turn the reins back over to the veteran or let the rookie keep building on an already successful season? After the team decided to keep Prescott as the man under center, a lot of speculation around Romo’s future with the Cowboys – and even the game of football – circulated around the media.

As we are well aware today in 2021, the media tends to be dramatic and unfortunately, it can get the best of people. The media expected Romo to throw a hissy fit as that seems to be commonplace among people these days when they lose. They look outward to blame rather than inward to take ownership. It is rare that someone loses their job through no fault of their own, especially in professional sports. When Tony Romo issued a prepared statement in November 2016 where he basically conceded his starting position to Dak Prescott, he bucked the trend – the trend that consists of complaining and whining among athletes that lose their spot.

In Romo’s statement, he spoke about the helpless feeling of watching his team that he built over the past decade or so. He referred to it as a “dark place,” but it is “in this moment you find out who you really are and what you’re really about.” He was looking inward and taking ownership. Romo goes on to say that in this dark place “You see football is a meritocracy. You aren’t handed anything. You earn everything every single day, over and over again. You have to prove it. That’s the way that the NFL, that’s the way that football works. A great example of this is Dak Prescott and what he’s done. He’s earned the right to be our quarterback. As hard as that is for me to say, he’s earned that right. He’s guided our team to an 8-1 record, and that’s hard to do. If you think for a second that I don’t want to be out there, then you’ve probably never felt the pure ecstasy of competing and winning. That hasn’t left me. In fact it may burn more now than ever.”

Romo goes on to recall times as a kid when he had to step in and prove himself. He remembers all the people that helped him along the way and how he desires to be that helping hand for the new quarterback. Romo said that he was “not going to allow this situation to negatively affect Dak or this football team by becoming a constant distraction.”

Has he earned your respect yet?

This is what leadership is all about. It’s acting on those cliché values like competitiveness, respect, and humility – not just preaching it. This is humility in its purest form: to give credit where credit is due even when you’re in a dark place. By competing, respecting, and humbly turning over the reins, though, some bright light starts to cut through the dark.

Today, Tony Romo is one of my favorite commentators during football games on Sundays. His knowledge of the game is spectacular, but his energy is absolutely contagious. He truly believes that there is no one that enjoys the game more than he does, and you can feel that. He’s climbed back from that dark place and can once again feel the pure ecstasy of competing and winning he referred to in his statement in 2016. Next time you’re in the dark, remember this message. Create your own light by competing, respecting, and showing humility. If you can do that consistently, you might get a taste of that pure ecstasy for yourself.